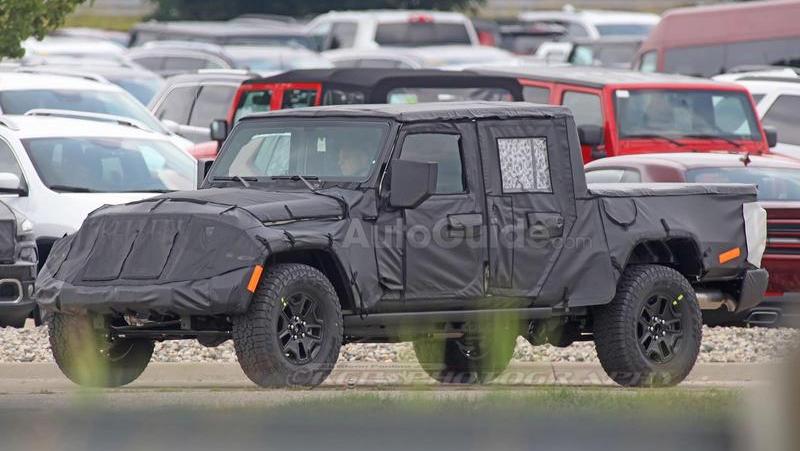 If you remember the last time Jeep sold a Wrangler-based pick up it was a number of decades ago. CJ-8 and CJ-7 pick-up models were sold under the Scrambler name and as expected that holds true for its successor this time around, FCA just couldn't give it up and its easy to see why. Screenshots from an FCA dealer system unveiled the name along some other vital information. Now that this has been confirmed, we don't know if Jeep will bring back the classic Scrambler decals but if they don't, you can bet that owners and independent shops will get custom sets made.

Quote:
Screenshots from FCA’s dealer system have leaked more information, this time showing details on the upcoming Jeep pickup truck, confirming the name to be Scrambler.

Rumors have been flying fast and furious about the upcoming JL Wrangler, with speculation and spy pictures bounding around the internet. Now, thanks to the power of the almighty screenshot, we have what appears to be some details of the JT Scrambler. That’s right; the Jeep faithful will finally get a new pickup.
- AutoGuide
____________________________________

Launches One Year After Wrangler JL

Allpar is one of many sources that have confirmed we will be seeing the all-new Jeep Scrambler launch one year after its JL Wrangler sibling. To kick off sales, Jeep will likely stick to common Wrangler JL trims and then slowly introduce features in the JL that will also be present in the Scrambler. One of the key changes to happen in this step approach during launch years will be introducing the available 3.0-liter turbocharged V6 diesel engine with start/stop technology.

Quote:
The Jeep Scrambler — or Wrangler Pickup, depending on how Auburn Hills wants to play it — is supposed to be produced roughly a year after the Wrangler JL starts up. The delay will give FCA a chance to wind down Wrangler JK production, do some much needed plant maintenance and upgrades, and such.

Allpar source Sean Rich told us that the base engine would, as with the Wrangler, be the gasoline V6; the diesel V6 shows up as an option (no word on the Hurricane Four). Chances are the 2019 Wrangler JL will also have a diesel option, though not at first. Export Wranglers will have a 2.2 liter diesel option.
-Allpar 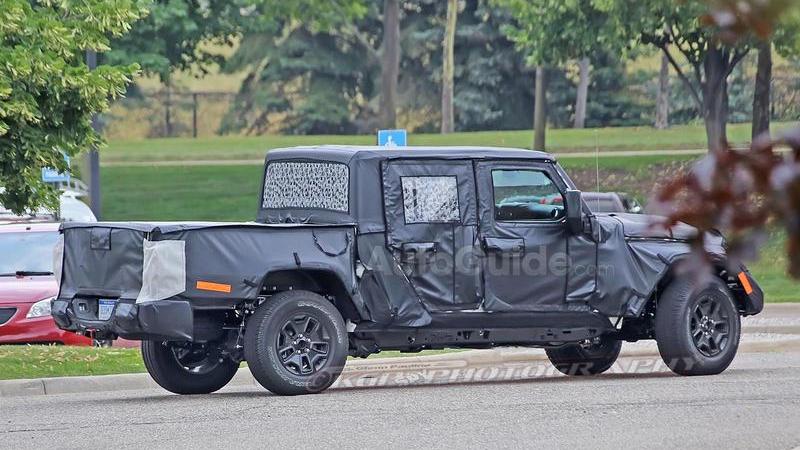 Playing right into the level of capability we get with the available 3.0-liter turbocharged V6 Diesel engine is a stretched wheelbase. Reports suggest the all-new Scrambler could be as much as 3-feet longer than a regular JL Wrangler. This, among other information that boosts the Scramblers capability should ensure that someone shopping for an F-150, Silverado, Titan or even Tundra, could very well opt for the Scrambler.

Quote:
Besides sounding cool and being part of Jeep’s long and storied history, the Scrambler name fits for other reasons. Like before, this Wrangler pickup is a stretched-wheelbase version of its host model. According to information found in FCA’s dealer system computers, the Scrambler (which carried the official “JT” moniker) sits atop a JK Unlimited frame that’s lengthened by 33 inches, bringing its length to 205 inches.

As for powerplants, the 3.0-liter turbodiesel V6 (with engine start-stop) discovered in the regular Wrangler’s options list also appears here, sans other engines. This means both Wrangler and Scrambler come with the torque-rich EcoDiesel motor. As for other Scrambler powertrains, it doesn’t look like the dealer system has all the categories filled out. It lists neither the Pentastar V6 or Hurricane four, nor any transmissions. A work in progress, it seems.
- TTAC
____________________________________ 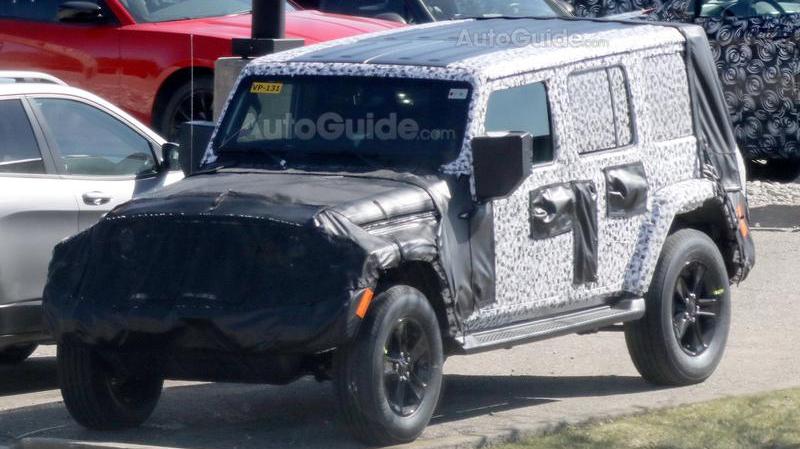 Anyone who has been watching JL Wrangler and JL Scrambler rumors, speculation and leaks from the very start will remember removable top options being a large part of that. As time went on spy shots came out helping to confirm what Wrangler and Scrambler communities have been talking about. A true three-piece hardtop (without sacrifice to pillars), glass roof and an entry-level folding soft stop are along the three rumored setups. Expect confirmations of the latter two at the debut this November.

Quote:
Sales codes in the dealership network reveal even more information. If we’re to believe the screencaps, we also have confirmation the pickup truck will have three different types of removable tops, just like the regular Wrangler. Buyers will be able to choose among a black three-piece hardtop, a body-color three-piece hardtop, and a black, foldable Sunrider softtop. Finally, the last bit of new information is that the truck will offer the turbo-diesel 3.0-liter V-6 with stop/start that previously was confirmed for the Wrangler. There is no mention, however, of the 3.6-liter V-6 or the turbocharged 2.0-liter inline-four.

These leaked details come while the Jeep name has been making headlines for a different reason. One of China’s biggest auto manufacturers, Great Wall Motor Company, is reportedly interested in making FCA an offer to buy Jeep, although no contact has been made as of yet. The Wrangler pickup truck expands an already large lineup and should only add to the brand’s desirability.
- CarandDriver
WranglerAdmin is offline
Quote
post #2 of 8 (permalink) Old 11-03-2017, 10:14 AM
PickMeUp
Senior Member


Join Date: Feb 2016
Posts: 308
I wouldn't be surprised to see the Scrambler launch with the same trims as the Wrangler; sport, Rubicon and Sahara. Also, as a pickup I'm expecting people to plug in accessories that requires electricity to run, thus a more powerful alternator, maybe 220-amp or more.
PickMeUp is offline
Quote
post #3 of 8 (permalink) Old 11-07-2017, 11:37 AM
JeepZone
Member


Join Date: Oct 2017
Posts: 42
I actually thought that trim levels (Sport, Rubicon, and Sahara) are officially confirmed already. Anyways, I'm pretty sure that they going to come up with those trims. What "plug in accessories" are you expecting to see?
JeepZone is offline
Quote
post #4 of 8 (permalink) Old 11-08-2017, 09:40 AM
PickMeUp
Senior Member


Join Date: Oct 2017
Posts: 42
As I know the only thing that really needs more power in terms of electricity is a winch, those lights don't really need anything more powerful than any basic alternator in any Wrangler.
JeepZone is offline
Quote
post #6 of 8 (permalink) Old 11-09-2017, 03:50 PM
Offroader
Senior Member


Join Date: Jan 2016
Posts: 782
Quote:
Originally Posted by JeepZone View Post
As I know the only thing that really needs more power in terms of electricity is a winch, those lights don't really need anything more powerful than any basic alternator in any Wrangler.
They just need to simply offer a winch rating that suits most owners needs and then make a higher capacity one available though Mopar but even that might not be a good idea. Better leaving it up to Warn or some other winch brand out there. Mopar hasn't been known to be all that specialty with parts.
Offroader is offline
Quote
post #7 of 8 (permalink) Old 11-10-2017, 11:04 AM
JeepZone
Member


Join Date: Oct 2017
Posts: 42
But at the same time, Mopar is the most popular aftermarket brand for Wranglers because of its close connection with Jeep brand. Usually, people tend to install winches right at the dealership where they buy Wrangler. Most of the time those dealerships have Mopar store inside the dealership and salespersons promote it as the best in the market.
JeepZone is offline
Quote
post #8 of 8 (permalink) Old 11-12-2017, 04:25 AM
Offroader
Senior Member


Join Date: Jan 2016
Posts: 782
Quote:
Originally Posted by JeepZone View Post
But at the same time, Mopar is the most popular aftermarket brand for Wranglers because of its close connection with Jeep brand. Usually, people tend to install winches right at the dealership where they buy Wrangler. Most of the time those dealerships have Mopar store inside the dealership and salespersons promote it as the best in the market.
I'm not negating that fact but just simply stating that they can't dip into every little thing owners want but instead they need to get into what people generally want. Its why brands like Warn are still very popular among the Wrangler community. Just look at any well established Wrangler community and you will see that.
Offroader is offline
Quote